I was about to say this was the first time I went to Oslo by myself, then I remembered I did take a work trip there in August last year. It was a 24 hours in-and-out trip, I get better at navigating the public transport each time 🤔 The trains, the tram, the bus, the apps! So proud of myself!

Winter doesn’t seem to want to go away, it’s got me thinking of sunnier climes in the tropics and jungle safaris.

I spent the weekend in Oslo and it was snowing quite heavily, I wasn’t ready! I love snow and all, and everything just looks so beautiful. My bones, however, just don’t agree! So of course I piled on a zillion layers.

It’s not so easy to look fabulous under 4 layers of wool, you can’t even strut your stuff or sashay in the snow! It’s a good thing that wintery land is a beautiful place, it makes up for the cold. But I truly feel I was born to sashay and be sunny, so here’s to warmer weather, please come back soon! 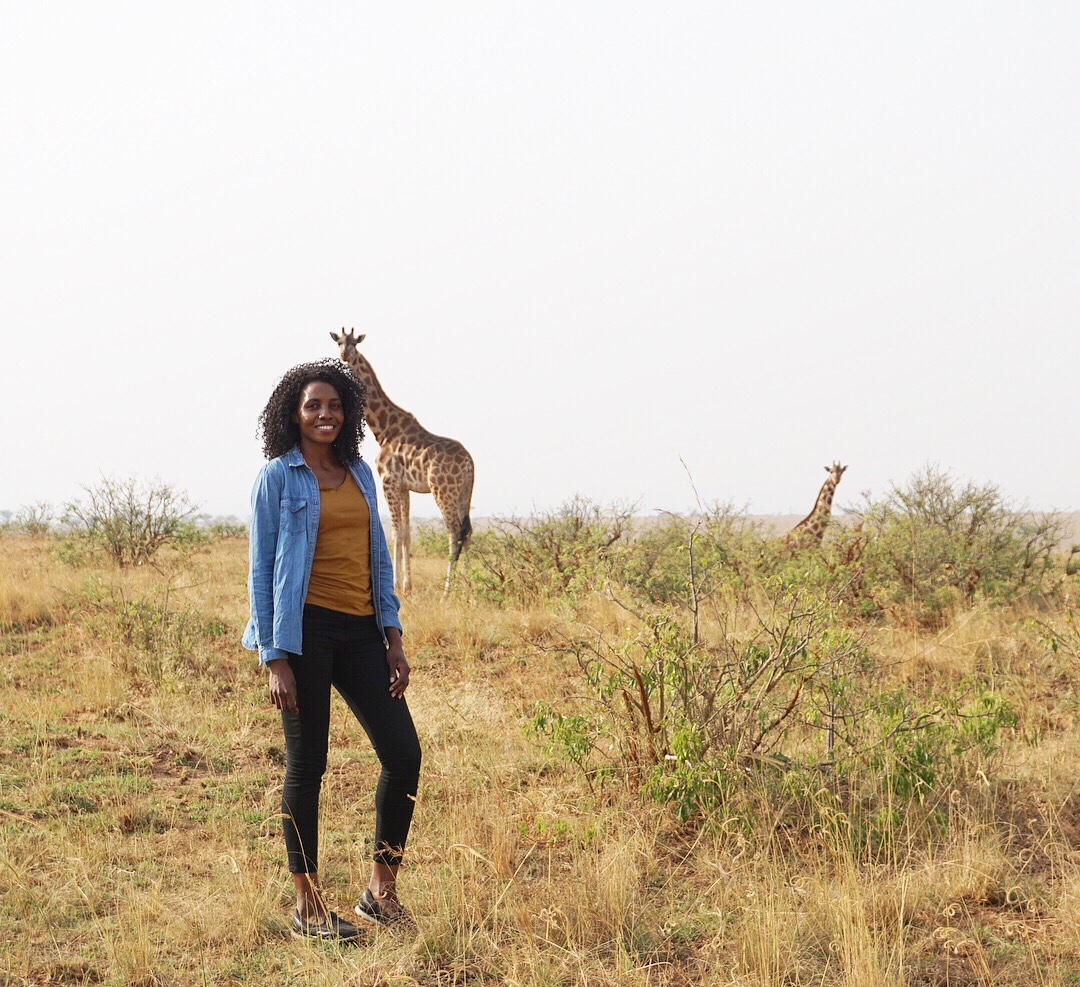 I’ve thought about you often in the past five years. During the time I spent reading your blogs and lovely writing, I felt that I grew to know you and that you were more that on-screen acquaintances I had never met. Carrie Rubin, Sandee, Daphnee, Noeleen, The Hook, Daniel, Cecilia, and many others. I’ve pictured you in my mind’s eye, imagined the streets along which you walk. I hope you’ve kept well, I hope you’ve had good fortune these past five years.

The years gone by have been a series of changing seasons for me. Out of what I thought was loss, I found good fortune. In what I imagined to be the palm of despair, I was touched by divine love. I grew. I nourished and I was nourished. My spirit was aglow, I thrived. My heart sung, and I sung. And I glowed. And when I couldn’t sing alone, I sought a choir of voices, and together we made music that soared our hearts to the heavens. And then good fortune found me, and I knew that He makes all things beautiful in His time. And my heart sung.

How have you been? I hope you’ve had good fortune!

Sometimes I’ll take a really long time to come to my blog, or WP in general, and when I do, I’ll usually just read some people’s posts then be gone till the next solar eclipse.

When you find that I’ve  spent a lot of time catching up on my reading of your blogs and have liked and commented on a zillion of your posts, please don’t feel obliged to come to my blog and read this or like that, chances are you may find nothing new. I just like reading your work, no strings attached. Okay? Happy New Year!

That said, thanks for stopping by. Now get back to your writing, reading or procrastination. 🙂

A blast of the cow horn rung out, filling the forest air with eeriness. She knew what it meant and her heart thumped in terror and despair. Pursue left and I’ll go right, was the signal of the horn. They were onto her, and they were close. That they were now hunting her down as they did game, complete with the cow horns that village hunters used, terrified her even more.

Quickening her pace with what little strength she had left, she continued to run with a single objective: to get as far away from her pursuers as she could. She could hear them whistle as they signalled their locations to one another. The wind and sweat from her forehead blinded her, and she stumbled upon the undergrowth as she ran. Everything was blurred, the shrubs left scratches on her arms and feet as she brushed them away and her feet were sore from running barefoot. She barely noticed the pain as she sprinted through the forest. Her mind kept returning to the events that had led her here.

By now, the rain was falling in bucketfuls. Namuli paused for breath under the thick branches of some trees, but she wanted to find a more suitable spot. Running on, she soon came to a gamers lodge. Hesitant, she stopped to study it it from a distance. The porch was overgrown with ferns, and the front yard with wild flowers. Some of the window panes had fallen out and she could see puddles of rain water collecting on the verandah from a leak in the iron sheet roofing.

She drew closer, wondering if an unused cabin was a safe place to wait out the rain or not. She didn’t have much choice anyway. This would have to do. She quickened her pace and approached the front door. On tiptoe, she went up the three steps that led to the entrance, and reached out to turn the knob. Suddenly, she stopped short. There were voices coming from inside. Quickly, she backtracked her steps, crouching at a window farthest from the door.

This post is prompted by a comment exchange with a blogger whose writing I like, but  whose blog I rarely show up to, as I’m subscribed to her posts by email – that should redeem me, right? —> anneschilde.wordpress.com

Anyway, in answer to a question of mine, she expressed that she’s planning to publish her book as an e-book, but dreams about having it published traditionally. I headed out to find some quotes on ‘dreaming’, and truly, when do you take out the time to thank God and/or Tim Berners-Lee for the inter-webs? I came up with lots, and these left me feeling pretty inspired – and probably more accident prone.

“I dream. Sometimes I think that’s the only right thing to do.”
― Haruki Murakami, Sputnik Sweetheart

“All (wo)men dream: but not equally. Those who dream by night in the dusty recesses of their minds wake up in the day to find it was vanity, but the dreamers of the day are dangerous men, for they may act their dreams with open eyes, to make it possible.”
― T.E. Lawrence, Seven Pillars of Wisdom: A Triumph

“Without leaps of imagination or dreaming, we lose the excitement of possibilities. Dreaming, after all is a form of planning.”
― Gloria Steinem

It’s probably pretty obvious by now that I live with my head in the clouds. I’m a dreamer. It’s the only way to be.

“And people who don’t dream, who don’t have any kind of imaginative life, they must… they must go nuts. I can’t imagine that.”
― Stephen King

This poor blog had recently gone the way of the dinosaur, so to speak. I found myself dropping by less and less frequently, and when I did, my visits were limited to the reader. I’ve finally diagnosed myself with a mild case of blogging ADD. I seem to always be on the look out for new things that pique my interest and take up all my time. Yes, I just may be the queen of procrastination, and what with all this social networking, there is always something to grab and hold onto your attention if you’ve got a mobile device and an Internet connection – and are willing. I’m guilty of being too willing, that’s my crime.

Gorilla mother and child. Uganda is one of few places you can find these.

My latest interest is tours and travel. END_OF_DOCUMENT_TOKEN_TO_BE_REPLACED

We’ve all got some lovely (I hope) childhood memories of Christmas, and I think Mark Twain’s family had some of the loveliest. Here’s a letter of his, one I took from Letters of Note, a bank of lovely letters that you won’t want to stop reading once you start.

During Christmas in the 1870s, when he wasn’t sending horse-led sleighs piled high with food and toys to his less fortunate neighbours, the inimitable Mark Twain could usually be found at the family home with his wife and young children, often pretending to be Santa Claus. On Christmas morning of 1875, Twain’s 3-year-old daughter, Susie, awoke to find the following charming letter on her bed. END_OF_DOCUMENT_TOKEN_TO_BE_REPLACED

I spent most of my day today doing a whole lot of big cleaning. That’s what we called it back in primary boarding school, when our 10-year old selves were given big brushes and told to scrub all the dormitories and classrooms until they glowed. I had been putting off this very necessary big cleaning chez Kat for a while and it left me panting but was, as always, very rewarding. I love it when every corner of the house that catches my eye is spick and span.

In the evening I visited a friend with a 3-week old baby. The poor chap was colicky, so I went over to see if he’s any better, and to check on his mom, of course. Also, we’ve got a novel-swap thing going, kinda like a 2-person book club, so I was dropping off a few of my recent reads.

The last novel she loaned me was a Jackie Collins that she promised didn’t have the usual excess of sex scenes. Ha! I should have known better than to believe her. The last time I had read a Jackie Collins was back in secondary school, around Form 3, which was also my Mills & Boon phase. I had found Jackie Collins to be, well, a little over the top for me, then. So when Dee said she had a Jackie Collins I ought to read, I was hesitant. I’d sooner jump up for a detective or some other thriller. It’s more my cup of tea. When I told her when I had last read JC, we concluded that perhaps I had found it a bit much since we were a lot younger then.

Having read the JC, I reported back to Dee with a complaint. ‘You promised it wasn’t too sexual!’ Come on, she’s the queen of that genre what had I been expecting! Out of curiosity, does she write anything else? Anyway, Dee replied that she didn’t consider that too much sex. Ha, well. Different folks, different strokes, right?

Speaking of Mills & Boon, back in boarding school, there was an Inorganic Chemistry textbook we used in A’ level that had Mills & Boon written at the back in a relatively large red font, I guess they were the publisher. Unusual, huh? Well, I thought so too. It so happened that we had to share these particular textbooks as the school lib only had a limited number.

Preparing for a chemistry exam one morning, I happened to yell out across our Form 6’s only hostel that comprised both arts and science students, ‘Could someone please lend me her Mills & Boon?’

‘Listen to this crazy girl,’ responded one of the other girls. ‘Instead of studying for your exam you’re looking for a romance novel! You must be mad’

Ha-ha. She was obviously a non-chemistry student. She was also very amused to learn that there was a little chemistry textbook we referred to as Mills & Boon.

Now here’s a special something from my homeland, famously called the Pearl of Africa. It’s filmed by Ikena Azuike at WhatsUpAfrica, I’ve got no claims on it at all, simply very happy to share. Have a look. Unfortunately, the embed function is disabled on this one, so I hope you’ll find it.

Next is a lovely one from South Africa, Emlanjeni.

What you may have missed

These guys are cool

You can find me here too!

You can find me here too!

Travel Couple and Digital Nomads on a World Travel

Savour Every Day|Do It For Love

blowing through the cobwebs of my mind

An International company that offers private antique art sales to clients around the globe.

be inspired to greatness

Arts and culture in East Africa and beyond